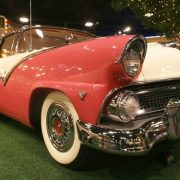 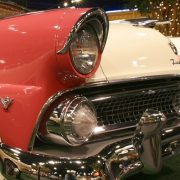 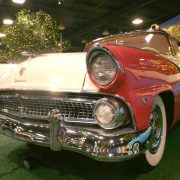 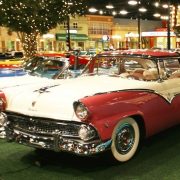 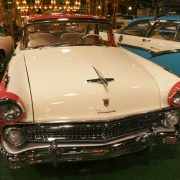 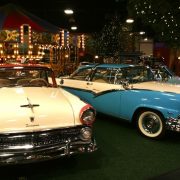 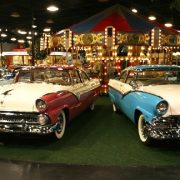 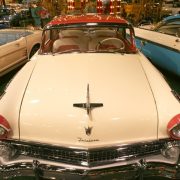 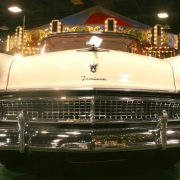 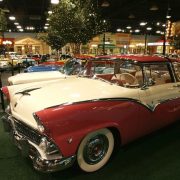 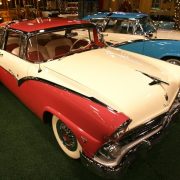 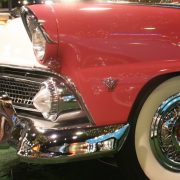 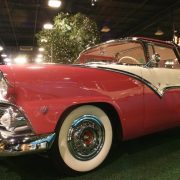 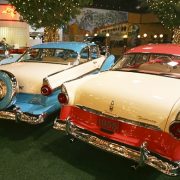 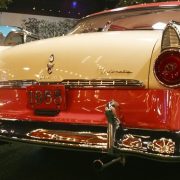 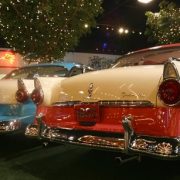 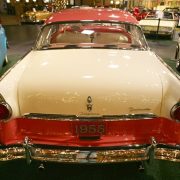 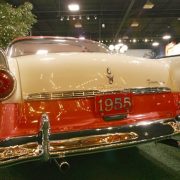 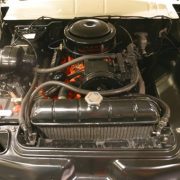 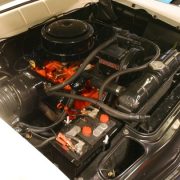 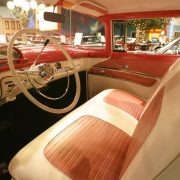 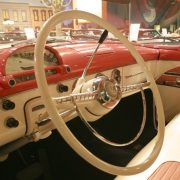 1955 Ford Crown Victoria 2 Door Hardtop (Above)
Owned and stored for the last 40 years by the same owner. Professional restoration on a rust free car. Features a 272CID V8 with an automatic factory to dealer air conditioning and wire baskets.History of Ford Crown Victoria
The Ford Crown Victoria is the current model name Ford uses for the rear-wheel drive full-size car first produced by the Ford Motor Company for the North American market in the mid-1950s. The name was introduced again in 1983 when the Granada was discontinued and renamed LTD. For many years, the full-size car has fallen out of favor, and Ford has been left with a near-monopoly as a result. In 1978, American Motors discontinued the Matador; Chrysler discontinued the R-platform full-size cars in 1980 and the M-platform in 1988. In 1996, General Motors pulled the Chevrolet Caprice and Impala SS off the market, leaving its Lincoln-Mercury stablemates as its only competitors.

The 5,424 Crown Victorias sold in January 2007 far exceeded the 3,526 of the newer Ford Five Hundred which is a more technically advanced full size car with similar passenger space and better fuel economy. But while newer front-wheel drive platforms may have been popular among consumers, they have not challenged the Crown Victoria’s dominance as a taxi cab, fleet vehicle and police car where durability, cost and performance rather than efficiency are top requirements. A longer wheelbase version is available for taxi use. As of the 2008 model year, the Crown Victoria has been limited to fleet sales, which constituted 91.3% of its total sales in 2007. Despite this, the Crown Victoria’s counterparts, the Mercury Grand Marquis and Lincoln Town Car will continue to be available to retail consumers. Fifty percent of its 2007 customers were retail.

As the latest evolution of the full-sized Ford (as the Crown Victoria traces its ancestry to the original 1932 Model B V8), it is the end of the longest succession of automobiles starting with the Model T. The “Crown Vic” is popular due to its conventional rear-wheel drive, V8 power, popular with police driving techniques. As one of the few remaining passenger cars with body-on-frame construction, it is rugged, and enables repairs after minor accidents without the need to straighten the chassis – an important benefit for a car frequently used by police forces for PIT maneuvers; ramming a car to spin it out. The Crown Victoria is also one of the few remaining automobiles which retains the traditional 2-bench 6 passenger seating layout, which has otherwise largely been replaced by the two front-bucket layout popularized by imports.

While the Crown Victoria shares its platform and components with the Lincoln Town Car, it shares almost no exterior sheet metal or interior parts. The current model has had a number of upgrades. Since the exit of General Motors from rear-drive full-size cars with the Chevrolet Caprice, it has held a near-monopoly as a pursuit vehicle in North America, despite front wheel drive offerings such as the Chevrolet Impala.

The first “Crown Victoria” appeared in 1955; it was a 2-door 6-seater hardtop coupe, part of the Ford Fairlane range, that differed from the regular Victoria model (named after a type of carriage) by having a stainless steel band that ‘crowned’ the roofline, passing right over the car, as an extension of the B-pillar line. The model was produced in 1955 and 1956.

One version called Ford Crown Victoria Skyliner had the front part of the roof, in front of the steel band, in acrylic glass. This made the car difficult to sell, especially in the southern states in USA. Thus few Skyliners were made. Most of them ended up in Sweden, possibly because the climate was more suitable for an acrylic glass roof.