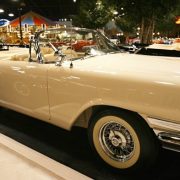 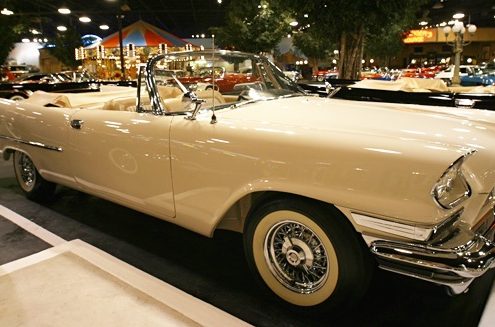 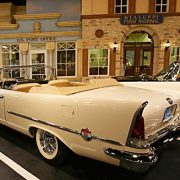 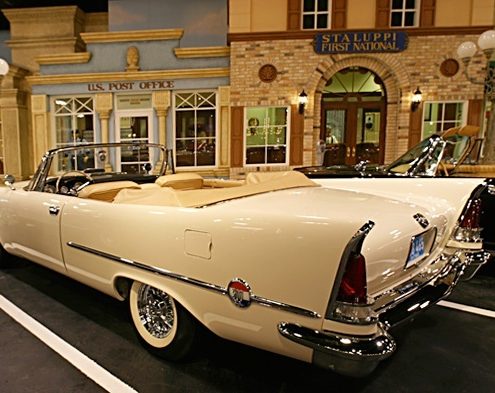 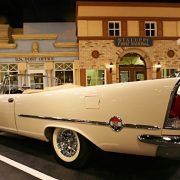 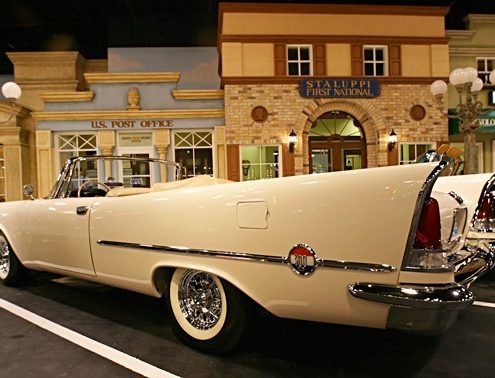 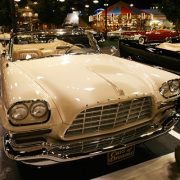 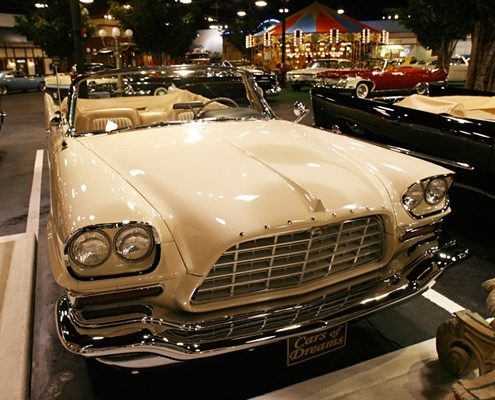 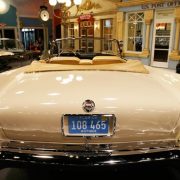 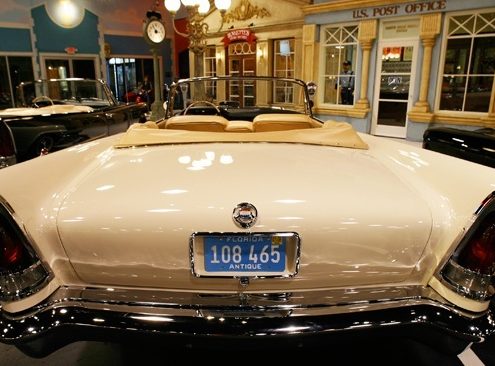 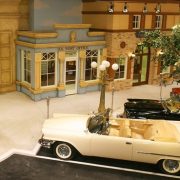 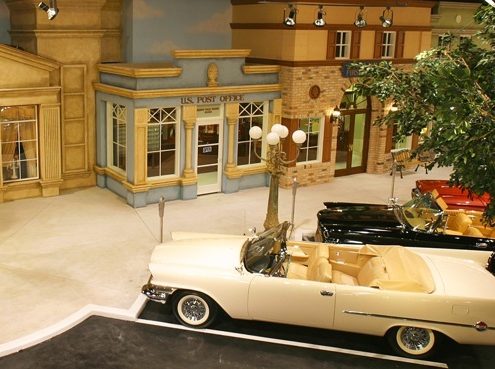 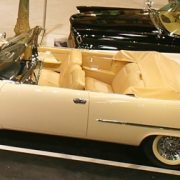 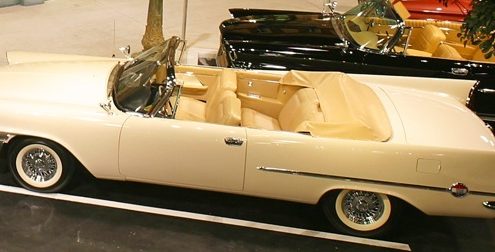 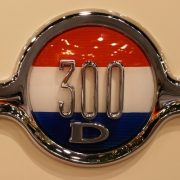 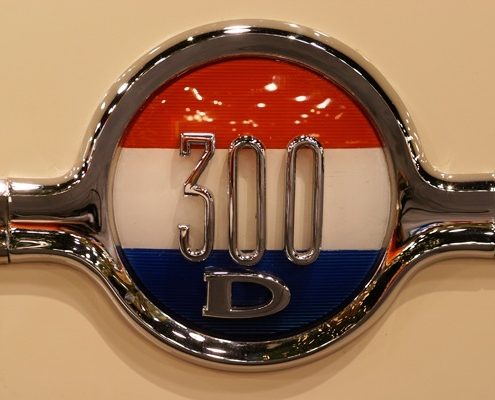 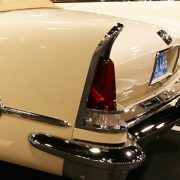 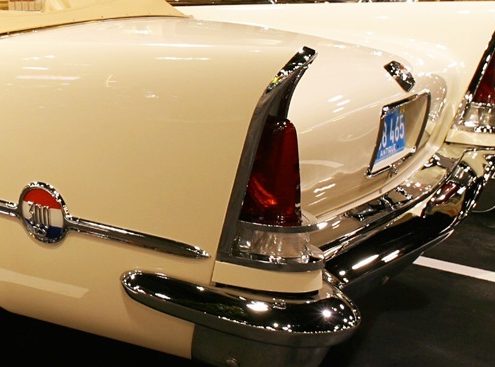 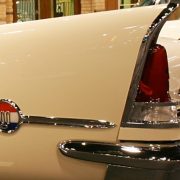 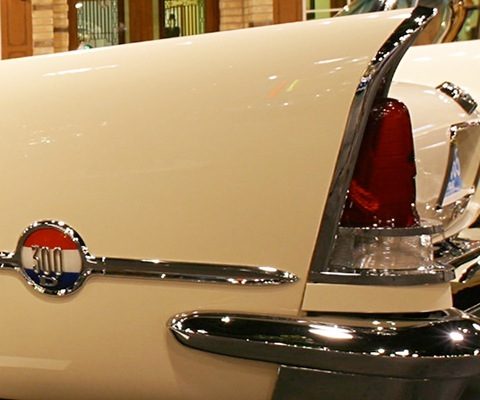 Chrysler has recently started using these designations again for sporting near-luxury sedans, using 300M from 1999, and continuing the 300 series with a new V8-powered 300C, the top model of a relaunched Chrysler 300 line, a new rear wheel drive car launched in 2004 for the 2005 model year. This is disliked by some fans of old Chryslers who do not approve of the reuse of a 300 letter series designation. Unlike the first series, the second does not have 300 hp engines, except for today’s top-line 300C.
1955 Chrysler C-300
This first of the letter series cars didn’t actually bear a letter; it can retroactively be considered the ‘300A’. The ‘C-‘ designation (later dropped) signified ‘Coupe’, while the 300 originally stood for the 300 hp (220 kW) engine. The C-300 was really a racecar sold for the road for homologation purposes, with Chrysler’s most powerful engine, the 331 cubic inch (5.4 L) FirePower “Hemi” V8, fitted with twin 4-barrel carburetors, a race-profiled camshaft setup, solid valve lifters, and a performance exhaust system. This was the first American production car to top 300 hp (220 kW), and the letter series was for many years the most powerful car produced in the United States by a fair margin.

1960 300F
The 1960 300F introduced a new, higher power 413 cubic inch Wedge engine delivering 375 bhp in standard form. To boost power at lower and mid rpms, a special “cross-ram” intake manifold was derived. Instead of the normal V8 central intake manifold with carburetor(s) on top, the cross-ram consisted of two pairs of 30″ (760 mm) long tuned pipes that criss-crossed so that each set fed the opposite side of the engine. The carburetors and air cleaners hung off the sides of the engine over the fender wells. These long tubes were tuned so that resonances in the column of air helped force air into the cylinders at those engine speeds.

The bodywork was also redone for 1960, using Chrysler’s new lightweight unibody construction and given sharper-edged styling with outward-tilting fins that were visually separated from sides.
Sales increased to 969 coupes and 248 convertibles. 961 300G
The 1961 300G saw another restyle. The grille, formerly wider at the bottom than the top, was inverted; the quad headlights, formerly side-by-side, were arranged in angled fashion, inward at the bottom, in a manner reminiscent of 1958 to 1960 Lincolns. Small parking lamps below the headlights were likewise slanted and V-shaped, and the front bumper was canted up at each end, scoop-like. At the rear, the taillights were moved from the fins to the tail below them, and the fins were made sharper-pointed.

1962 300H
From 1962’s 300H, the fins were gone after stylist Virgil Exner left Chrysler. Gone, too, was the letter series’ unique place in the Chrysler lineup; there was now a whole Chrysler 300 series, of which the 300H was but the top model. Externally there was little difference between the 300H and the plain 300 (except for a “300H” badge on the driver’s side of the trunk), and many of the 300H’s features could be ordered as options on the other models. Under the hood of the 300H, the same long ram and short ram Chrysler RB engines were still there. With a slight power boost and a 300 lb (140 kg) lighter body, the 300H was faster than the 300G, but the loss of exclusivity coupled with high prices made this the slowest-selling letter series year yet, with only 435 coupes and 135 convertibles sold. The regular 300 (non-letter) series used a 383 cubic inch B engine.