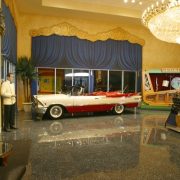 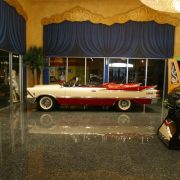 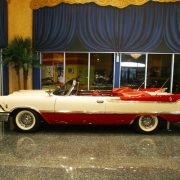 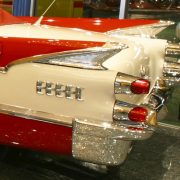 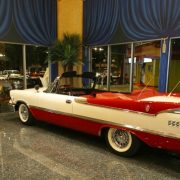 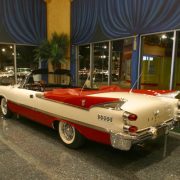 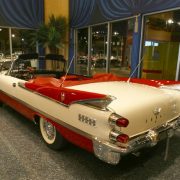 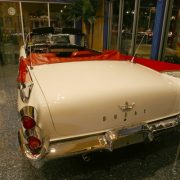 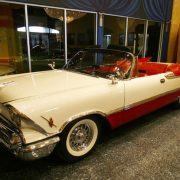 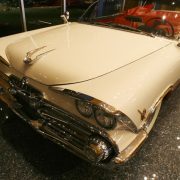 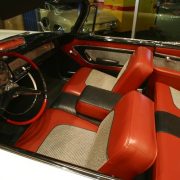 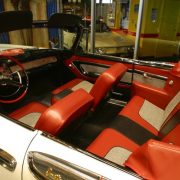 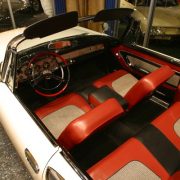 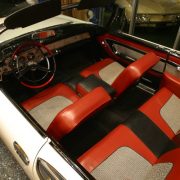 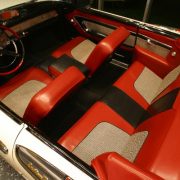 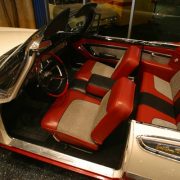 Dodge used the Lancer name from 1955 to 1959 to designate both two- and four-door pillarless hardtop models in the Coronet, Royal and Custom Royal lines. The Custom Royal Lancer was a hardtop only and top-of-the-line model for Dodge in 1959. There were 6278 2-door hardtops made and 5019 4-door hardtops made in 1959. Only 11,397 Custom Royal Lancers were made. The Custom Royal Lancer featured a big-block engine, 361 cubic inches at 305 horsepower. A D-500 option was available, which was a 383-cubic-inch engine with a single Carter 4-barrel carburetor rated at 320 horsepower and a Super D-500 engine option, a 383-cubic-inch engine with dual 4-barrel carburetors rated at 340 horsepower. The Custom Royal Lancer also featured padded dashboard, steering wheel, Lancer emblems on the fenders, steering wheel, hubcaps and glove box, foot-operated windshield wipers, dual radio antennas, deluxe side trim and thick chrome eyebrows. Optional equipment included power windows, brakes, air conditioning and swivel seats. The Lancer designation was dropped for 1960.
The 1959 Dodge Custom Royal is a rare bird. For one thing, it’s one of only 984 fliptop Custom Royals built for 1959 (base-priced at $3422). For another, it has that year’s new Super D-500 option, a 383-cubic-inch V-8 with twin four-barrel carburetors and a blistering 345 horsepower. The point? The Super D-500 was available on any Dodge.

That 383 was a new size for Dodge as well as ’59 Chryslers and DeSotos, the first of what would be a long line. But you didn’t need the Super D-500 to enjoy a Custom Royal ragtop, as its standard engine was a Super Ram Fire 361 with a healthy 305 bhp. In between was a single four-barrel 383 D-500 option with 320 bhp.
All these engines were efficient “wedgeheads” that worked best with responsive TorqueFlite automatic transmission. Rivaling its trademark pushbutton controls for futuristic gimmickry was another new ’59 feature: swivel front seats. Our featured Custom Royal has these too, though other Chrysler makes also offered them. The idea was to ease entry/exit in ever-lower cars. This option was fairly popular, but it didn’t last beyond 1960.