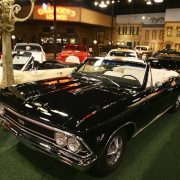 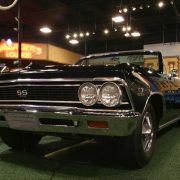 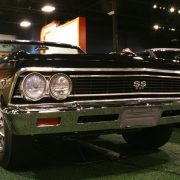 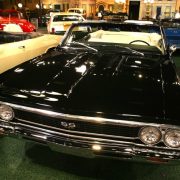 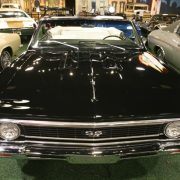 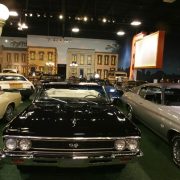 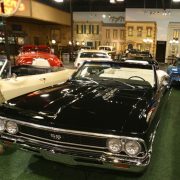 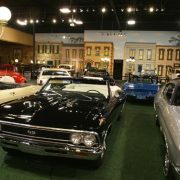 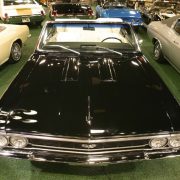 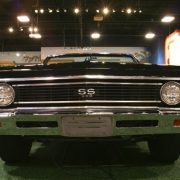 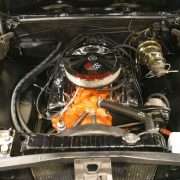 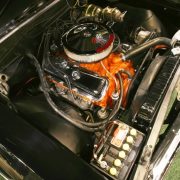 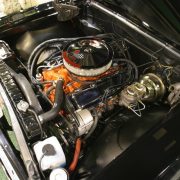 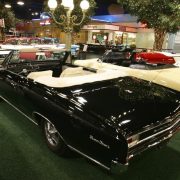 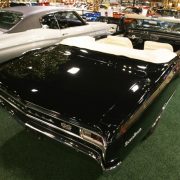 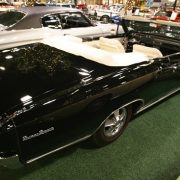 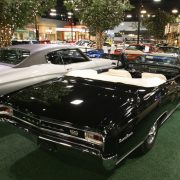 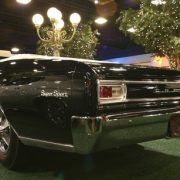 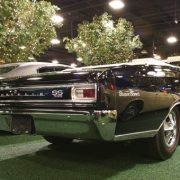 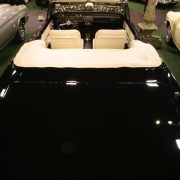 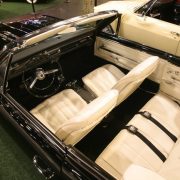 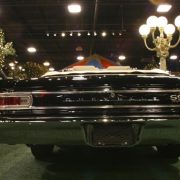 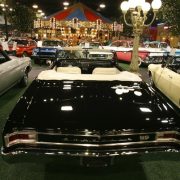 A utility pickup, the El Camino, was part of the lineup and, depending on the year, was available in 300/300 Deluxe trim level, Malibu trim level and the one-year only SS396. The El Camino outlived its passenger car counterpart until its demise in 1987.
The Chevelle SS represented Chevrolet’s entry into the muscle car battle. Early 1964 and 1965 Chevelles had a Malibu SS badge on the rear quarter panel (the sought-after Z16 option had the emblem on the front fender, where 201 Malibu SS 396s were produced); after 1965, the Malibu SS badging disappeared except for those sold in Canada. The Chevelle SS, which became a regular series of its own in 1966 called the SS 396, was the high performance version and had its own line of engines and performance equipment. The performance engines available included 396 in V8s – rated at 325, 350 and 375 hp respectively (the mid horsepower 396 was rated at 360hp for 1966 only and 350hp thereafter). The SS396 series only lasted three years from 1966 through 1968 before being relegated to an option status just like air conditioning or a radio. The 1966 and 1967 model years also saw the limited run of the ‘strut back’ 2-dr sport coupe with its own model number, 17, as opposed to model number 37 used on previous and later 2-dr sport coupes. The 1968 model year was the first and only year of the SS396 El Camino with its own series/model identification of 13880. Almost all the goodies (big block engine, suspension, transmission options, etc.) of the SS396 could be ordered on the 1966 and 1967 El Camino but, sadly, the SS396 series El Camino was not available until (and only in) the 1968 model year. As with the 300 Deluxe and Malibu in 1969 and only the Malibu from 1970 to 1972, the SS option could be ordered in the El Camino as well.

Two prototype Z16 Chevelles were built at the Baltimore plant and all regular production Z16 Chevelles were built at the Kansas City plant. Whether these 2 prototypes and the 1 reported convertible are included in this 201 figure isn’t known. The 1 convertible was reportedly special built for Semon “Bunkie” Knudsen but is commonly called the 201st Z16 Chevelle. Unfortunately there’s no known documetation available on this car and to date no known photos of it have surfaced which leaves its existence in question.

For 1971, GM mandated that all divisions design their engines to run on lower-octane regular, low-lead or unleaded gasoline due to tightening emission requirements and in anticipation of the catalytic converter that would be used on 1975 and later models, necessitating the use of unleaded fuel. To permit usage of the lower-octane fuels, all engines featured low compression ratios (9 to 1 and lower; well below the 10.25-11.25 to 1 range on high performance engines of 1970 and earlier). This move reduced horsepower ratings on the big-block engines to 300 for the 402 cubic-inch V8 but surprisingly, the LS-5 454 option got a “advertised” five-horsepower increase to 365. The LS-6 454 option, which was originally announced as a regular production option on the Chevelle SS for 1971, was dropped early in the model year and no official records indicate that any 1971 Chevelles were assembled with the LS-6 engine.
In the face of declining musclecar sales following the “insurance surcharge” wrath of 1970, the Chevelle SS – at least in base form – changed from a specific performance car to a trim package, much like the original 1964-65 Chevelle SS models that pre-dated the introduction of the SS 396 in 1966. For 1971, the base Chevelle SS engine was a two-barrel 350 cubic-inch V8 rated at 245 gross (165 net) horsepower and optionally available was a four-barrel carbureted version of the 350 V8 rated at 275 gross (200 net) horsepower. The big block engines of previous years were now extra-cost options including the 402 V8 rated at 300 gross/270 net horsepower; and LS-5 454 V8 with 365 gross and 285 net horsepower. Chevrolet specifications for 1971 included both “gross” and “net” horsepower figures for all engines to ease the transition to 1972 and later years, when Chevy and other manufacturers only listed the “net” horsepower ratings.