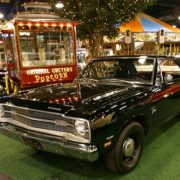 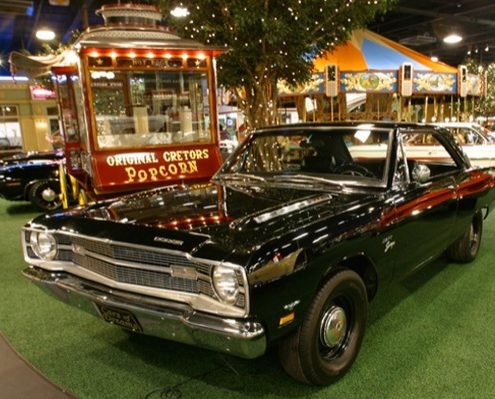 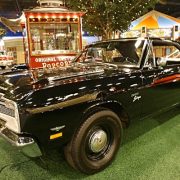 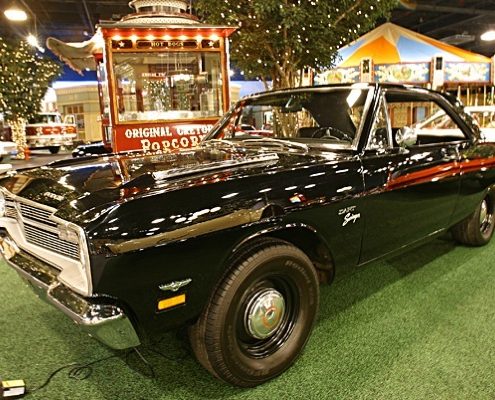 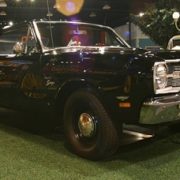 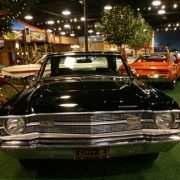 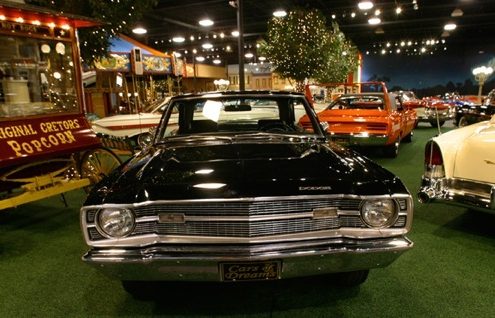 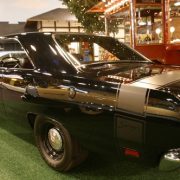 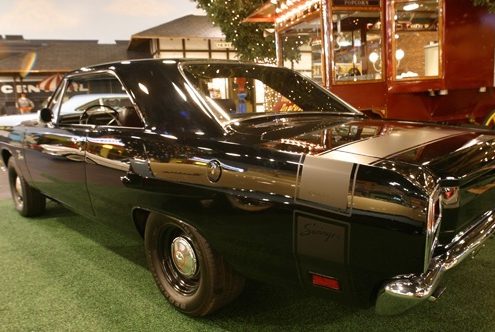 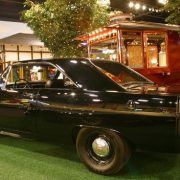 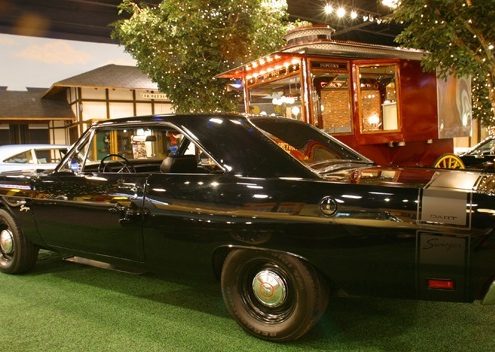 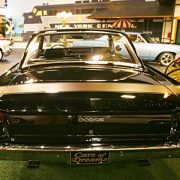 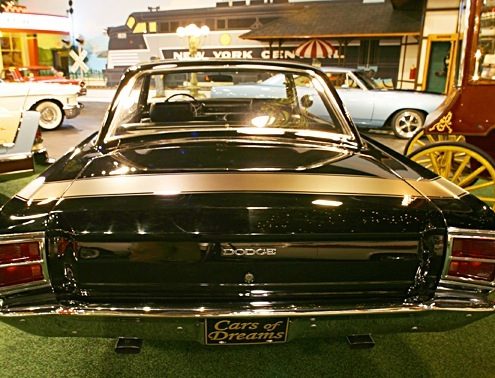 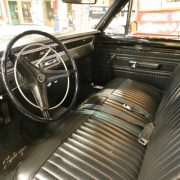 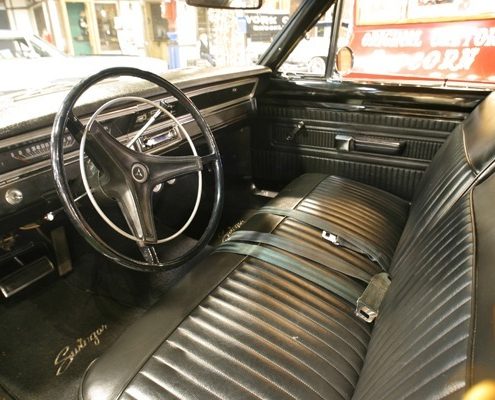 The Dart and its sister model, the Plymouth Valiant, were significantly redesigned for the 1967 model year. In addition to new styling, the cars received revised steering systems, wider front track (and wider spaced rails) and redesigned K-members capable of accepting physically larger engines. The Dart would keep this basic form, with a few facelifts consisting of revised front and rear end styling and interior trim, until the end of A-body production in 1976 (US/Canada/Mexico) and 1983 (South America).

The restyled Dart for 1967 featured a rear window (backlight) with compound inverse curves. This created a unique appearance at the rear of the greenhouse, but tended to collect snow and created thick C-pillars that looked formal but created blindspots for drivers. Curved side glass was used for the first time on a Chrysler compact. Up front, there was a new dual-plane front end contour: the center section of the grille, bumper and leading edge of the hood were recessed from the front plane of the car. The single headlamps were placed forward of the recessed center section, defining the front plane. Park/turn lamps were set into the grille, in the corners formed by the transition area between the recessed and forward sections. This same front end treatment, with minor cosmetic changes to the grille and the park/turn lamps relocated to the front bumper, was also used by Chrysler Australia for their 1967 VE-model Valiant.

With the new design, changes were made to the Dart line-up, beginning with the elimination of its station wagons and the base model’s “170” designation. The only body styles were the 2 and 4 door sedans, the hardtop, and the convertible. The base 170 model was now badged simply as Dart. The 270 and GT versions carried on unchanged for the most part. In late 1967, the GTS model debuted but was built in limited quantities due to its lateness in the model year; the 1968 GTS would be, arguably, improved by fitting the new high-outout 340 cubic in. (5.6 L) V8 engine as standard equipment. The 2-door sedan was dropped at the end of 1968 and replaced with the Swinger 2-door hardtop for 1969. Also added was the Swinger 340.

Changes during the styling cycle
In 1968, Dodge released one of the most feared drag cars ever: the 1968 Hurst Hemi Dart. Dodge would ship Dart body shells to Hurst and they would install a ram-inducted 426 cubic in. (7.0 L) Hemi V8 under the hood. Using fiberglass fenders and hood, belt straps for window cranks, and A100 seats for decreased weight, this car and its sister car, the Hurst Hemi Barracuda, would dominate Super Stock for decades to come; in fact, it still does today. Grand Spaulding Dodge, a noted Dodge dealer in Chicago owned by legendary builder Norman “Mr. Norm” Kraus, put the 440 cubic in. Magnum engine under the hoods of selected Dart GTSs and renamed them GSS for “Grand Spaulding Special.” Efforts like this led Grand Spaulding Dodge to become a noted provider of Dodges specially modified for extremely high performance, much as Yenko and Royal did for Chevrolet and Pontiac, respectively.

Other changes for 1968 were more subtle. The park/turn lights in the grille were moved slightly inboard and made round. Sidemarker lights were added to the front fenders and rear quarter panels, to comply with newly introduced Federal Motor Vehicle Safety Standard 108. Other changes to comply with new federal safety laws included collapsible steering columns, additional padding on the dashboard and sunvisors, a brake system fault warning light, shoulder harnesses (separate, this year and until 1973, from the lap belts) and nonglare matte finish on the windshield wiper arms. Chrysler’s “Clean Air Package” emission control system became standard equipment on cars sold in all 50 states. The steering linkage was revised again, as were the windshield and backlight gaskets and trim-lock strips, leaving the 1967 pieces in these departments as one-year-only items. The standard rear axle ratio was dropped from 2.93 to 2.76 with all standard-performance engines and automatic transmission. Part-throttle downshift functionality was added as a refinement to the TorqueFlite automatic transmission in 6-cylinder cars, to retain acceptable city performance with the taller rear axle ratio.

For 1969, the Dart received trim updates including another minor revision of the grille, and a return to rectangular park/turn lights. The 1968 round sidemarker lights were replaced with rectangular reflectors. Head restraints were optional equipment until January 1, 1969, when their installation became mandatory under federal law. The 6-cylinder models received a carburetor anti-ice system borrowed from Canadian-market Chrysler 6-cylinder engines, and the drum brake automatic adjustors were revised for more consistent operation. Also, the two-door pillared sedan was deleted from the lineup. At the top of the Dart performance range for 1969, there was limited availability of the 440 cubic in. V8 in the Dart GTS model and a very few 426 Hemi models in the “Hurst” edition Dart.

SCCA & Super Stock competition
In 1967, the Dart entered the Sports Car Club of America’s (SCCA) new Sedan Class racing series. For racing in this series, the compact cars , which included Ford Falcons and Plymouth Barracudas as well as foreign makes, were prepared like stock cars on the NASCAR Grand National circuit. “Baby Grands” was the nickname coined for these cars. Darts were powered by the four-barrel 273 V-8 and were equipped with roll cages and fifteen-inch (381 mm) wheels with fat tires. Bob Tullius, widely known for his Quaker State Motor Oil Group “44”-marked cars, was one of the first to drive the Dodge Dart in the sedan class, and with notable success.